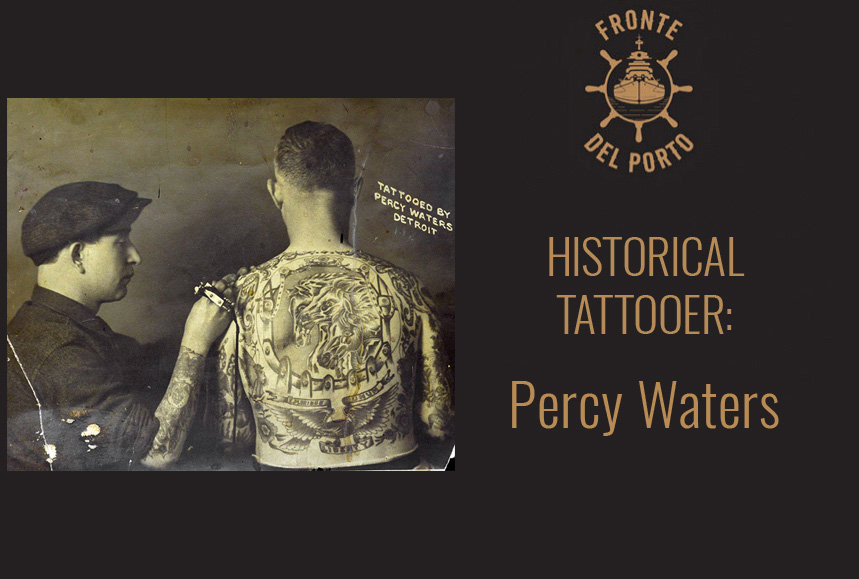 Percy Waters was born in the eastern city of Anniston, Alabama, in 1888. Waters saw his first tattoos on the sides of the traveling circuses that would pass through his hometown. During his apprenticeship in a foundry Waters bought tattoo equipment and started tattooing the locals as a hobby, he also began to travel frequently to visit tattoo artists in other cities while keeping his foundry job.

In 1917 Percy Waters got into trouble for having the wrong person tattooed and was forced to leave Annisto. After a brief stop in New York City, Waters settled in Detroit, Michigan, where he remained until the late 1930s. While in Detroit, Waters opened a tattoo studio and began studying and selling equipment to other studios with great success. Over the years Waters has tattooed many celebrities including; Bobby Smith, Red Van, Detroit Dutch, Shelly Kemp, Clyde Williams, Mrs. Ted Hamilton and others. Although he modestly referred to himself as “Just a good tattoo artist”, he was well known for his skills in tattooing both in and out of showbiz.

At the time, Waters’ supply business was arguably the largest in the world. We find many advertisements for his wholesale business for tattoo artists in many “men’s magazines” as well as in the Police Gazette and Billboard. In the 20 years that Percy Waters worked in Detroit, he designed and manufactured many types of tattoo machines. managing to obtain an official patent from the United States in 1929.

In 1939 Waters left Detroit and returned to his home in Anniston where he ran his supply business until his death in 1952.