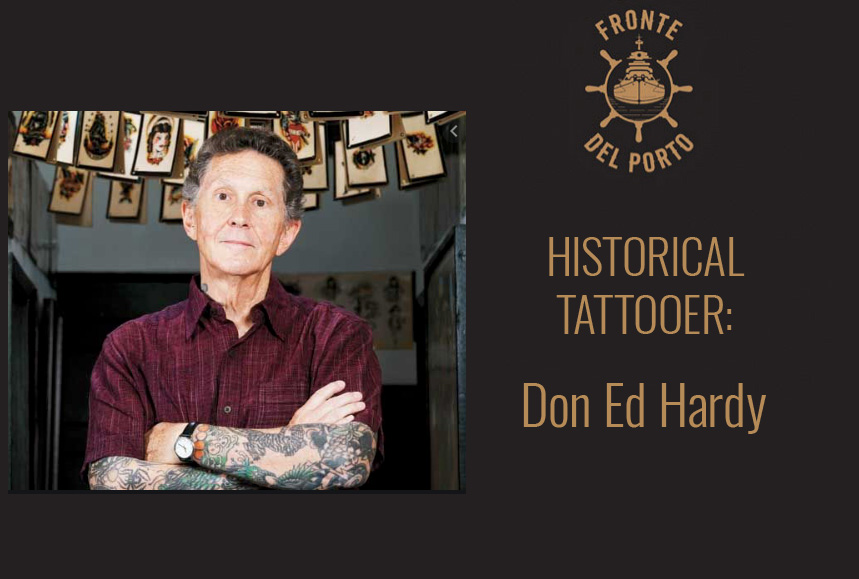 Don Ed Hardy is an American Southern California tattoo artist. A real pioneer who pushed the art of tattooing towards new frontiers, thanks to his work experiences around the world.

Born in 1945 in Iowa and then moved to California, he attended the San Francisco Art Institute obtaining a degree in Fine Arts. Student of Sailor Jerry Collins had in 1973, thanks to the latter, the opportunity to live in Japan studying with the master of the traditional Japanese tattoo Horihide (Ed was the first non-Asian to have access to that world). Upon his return in 1974, he created his “Realistic Tattoo Studio” at 2535 Van Ness in San Francisco, the first private studio organized only on dates in the United States. His artistic style changed the face of modern tattoo and became famous for having incorporated the aesthetics and technique of Japanese tattoo in traditional American style and for the preference for large tattoos customized to the client’s specific wishes.

In 1977 Hardy met Charlie Cartwright and Jack Rudy, two Los Angeles tattoo pioneers of the “Black & Gray” style. Hardy, recognized how special this new style was for the tattoo world, when Cartwright left the business, founded “Tattooland” with Jack Rudy to preserve the studio founded on “Black & Gray”. In 1977 Ed also opened his famous Tattoo City in San Francisco which was the first to be opened in the Mission district founded exclusively on this style. This shop was destroyed in a fire in 1978, although it had been open for less than a year left an indelible mark on the Bay Area tattoo scene.

In 1982, Hardy and his wife founded “Hardy Marks Publications”, publishing the five-book series Tattootime and more than 25 books on alternative art. The main objective of Hardy is the creation and display of works of alternative art forms, not based only on tattoos, but for example engravings, drawings and paintings. In the 2000s, Hardy entered the fashion industry by granting the rights to his flashes to turn them into a clothing line. Also in those years in 1999 Tattoo City opened in a new larger and better positioned location, remaining up to now an example of excellence and quality with many artists under the careful supervision of Hardy, now retired from tattooing.