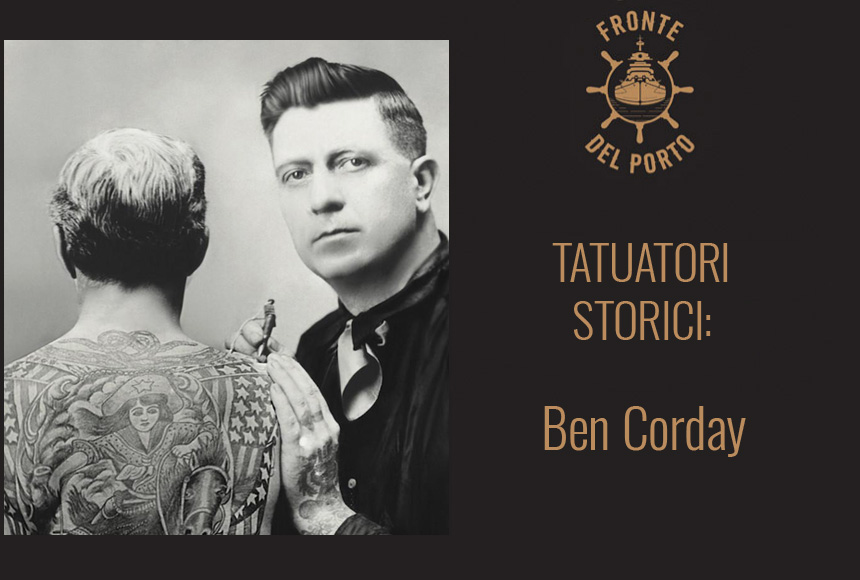 Today we want to talk of another historical tattooer: Ben Corday one of the most important tattooer for American Traditional tattoo. Thanks to the wonderful drawings of his publication Tattoo Travel Book by Hardy Marks – Ben Corday we have a register of his pictorial skills. His flashes scored, as D.E. Hardy, “a primary influence on the tattoo of the early twentieth century”.

Ben Corday was born in 1875. While his obituary indicated Singapore as his birthplace, a report on his application for US citizenship said that Corday was born in Lucknow, India. Of British nationality, Corday began a life at sea when he fled at the age of 14 to work on board a ship. Shortly thereafter, Corday joined the Royal Marine Corps and then the Scottish Guards, for whom he fought in the Second Boer War in South Africa. After leaving the military, Corday moved to the United States, where he applied for citizenship in 1912. Later, Corday found work as a secondary attraction in the Sells Floto Circus. Wrestler and actor, he appeared in two silent short films directed by Hal Roach.

A man of many professions, Ben Corday was primarily known for his career in tattooing, which he practiced after emigrating to the United States. Corday has lived and tattooed in several different places. He is known for tattooing in San Francisco, New York City, Australia and Los Angeles. What is known of Corday’s tattooing career is mainly left to the stories passed down by his peers. His mentor, the American tattoo artist Bert Grimm, told many of these stories to the San Francisco tattoo artist Lyle Tuttle. In these stories, Grimm describes Corday as a prolific and well-known alcoholic artist who would have sold off entire flash sets due to his addiction. Corday eventually settled in Los Angeles, where he tattooed on Main Street. He died in his sleep in his residence on nearby Hewitt Street in February 1938.

Corday was an influential tattoo artist of the early twentieth century whose work is considered fundamental for the evolution of modern tattoo. Corday’s style, definitely influenced by Japanese, is known for fine line work and subtle nuance. Corday’s name was known and highly appreciated by American tattoo artists of the same period as Bert Grimm Sailor Jerry and Don Ed Hardy. The very large production of Ben Corday, largely sold to the tattoo artist Percy Waters, continues to influence the tattoo world even today.