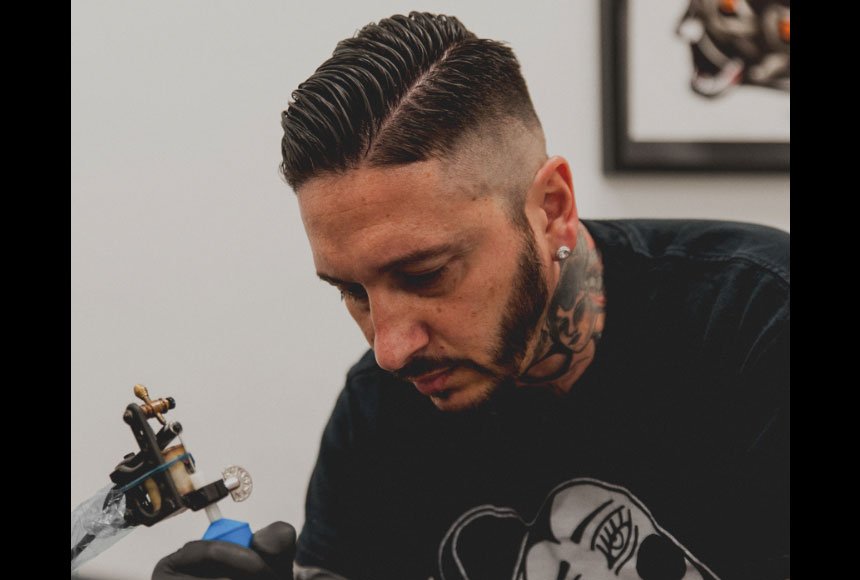 For the second interview we chose to get to know Gianluca Artico, another pillar of the studio, with us from the first day of opening of Fronte del Porto.

How did you approach the world of tattooing, what fascinated you?

I approached the world of tattooing in the early 90s, a little out of curiosity a bit ‘for rebellion, I was very fascinated to have something imprinted forever on the skin beyond the iconographic meaning.

Remember the first tattoo you made?

The first tattoo I made was in the 90s to my cousin in handpoke style without tattoo machines! In those times it was difficult to find equipment.

What is your favorite style or style and how has your way of tattooing evolved over the years?

I started tattooing the traditional American style several years ago, time going I started a metamorphosis that is still ongoing in evolution and is very close to the traditional Californian.

What do you think of the world of tattoos nowadays?

The world of tattooing has changed a lot today. Unlike previous years it is easier to learn thanks to modern equipment but the ability to amaze and be recognizable remains the way to stand out!

At what point in your career did you become part of the Fronte di Porto family and what does it mean for you to work in this studio?

I arrived at Fronte del Porto since the opening,  after few years spent at home and a brief stop in another studio, it is my second home. I spend most of the day in the studio tattooing, drawing, painting and sharing knowledge and experiences with the people I work with, this allows me to have a constant growth!

What are your plans for next year?

Projects for the next year are to continue to grow and improve, I would also like to travel abroad to in Europe for conventions and guests.

Do you have any other passion outside the world of tattoos?

Outside the world of tattooing, I have different types of geek passions: playing boardgames, painting toy models, collecting 80s toys… All this influences my lifestyle and work!