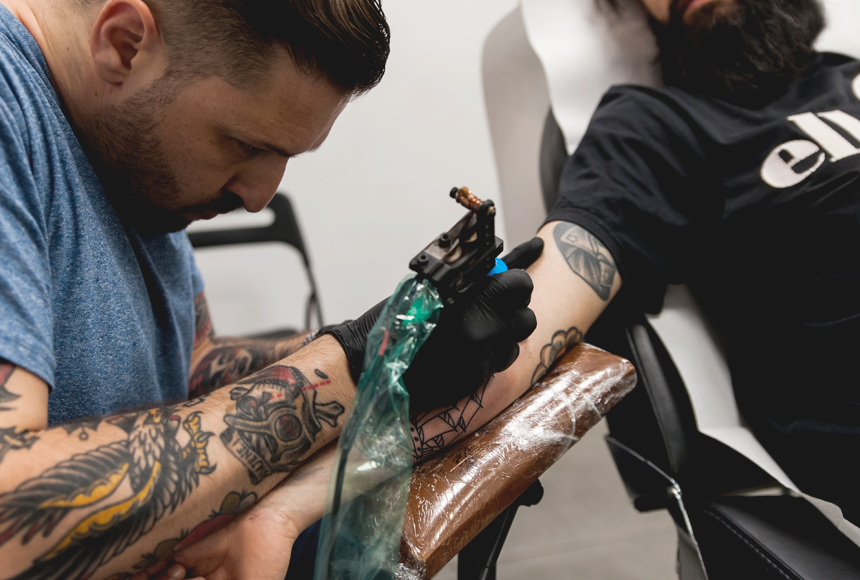 Fabio Onorini’s interview on Zero, since 1996 the most widely read magazine of events and lifestyle.

When you talk about American traditional tattoo, FABIO ONORINI is one of the most representative artists. Well-known and recognised in Rome and in Italy, but also over the national borders, he is one of the founders of FRONTE DEL PORTO, a Studio that focuses its main work on dialogue and research with the customer, for this reason it’s also called “TATTOO PARLOUR”.

You can found Fabio here and on INSTAGRAM too, but if you meet him at a Pub, you can offer him a glass of whiskey!

Let’s begin by introducing Fabio with some personal questions.

ZERO: let’s beginning by introducing you: when were you born and where are you from?
FABIO: I was born in Viterbo on the 4th of march, 1983 and I have been leaving there up to 18 years, then I moved to Florence where I attended the Academy of Fine Arts.

ZERO: Do you remember the first tattoo that caught your attention, who had it and what was the subject?

FABIO: The first tattoo I remember was an Orca on the forearm of one of my father’s colleague. After twenty years, I had the great pleasure to tattoo him personally.

ZERO:  What’s the first tattoo you’ve made on your body?

FABIO: An alpine star on my forearm.

ZERO: Have you ever drawn one on your own?

FABIO: Yes, once, a skull on the quadriceps on my leg.

ZERO: When and on whom did you draw your first tattoo?

FABIO: I’ve already told you about my first tattoo: the skull on my leg. That tattoo even increased more and more my desire to tattoo.

ZERO: Just after that first tattoo, did you realize that this art would become your profession?

FABIO: Yes, that’it! After that first tattoo, I wanted to continue to tattoo more and more and make this passion my job.

ZERO: You’ve just mentioned the Academy of Fine Arts… So, how much of that formative experience have you brought into your current profession?

FABIO: So much! The Academy gave me a background of knowledge that I am still using today. But I must say that being the son of two painters gave me even more.

ZERO: Did you begin to work in Florence or in Rome?

FABIO: In reality I began in Ovindoli, a ski resort where I moved the first steps while, in the meantime, I was a snowboard teacher.

ZERO: And why did you move to Rome?

FABIO: I moved to Rome due to working reasons, but also because my wife lived there.

ZERO: In Rome you are now working in the Studio FRONTE DEL PORTO. Can you briefly tell us the story of this parlour?

FABIO: Fronte del Porto Tattoo Parlour was born in 2013 from a common project between me my and my dear friend David Serafini. Inside Fronte del Porto, we decided to include our passion and our philosophy: talented tattoo artists of the national and international scene guests for artistic exchange and growth.

ZERO: Who are the other Tattoo Artists of Fronte del Porto?

ZERO: What does it mean to you FRONTE DEL PORTO TATTOO PARLOUR?

FABIO: I mean Fronte del Porto as an ancient living room, where tattoo artists and customers can meet and try to develop together an ever increasingly accurate tattoo, intended both as a single piece and as an artistic path.

ZERO: how many tattoos do you usually draw in a month?

FABIO: I prefer to make a piece a day. In this way I can dedicate all the needed time and attention to my tattoo. So I make about thirty drawings a month.

ZERO: Which styles do your customers require to you?

ZERO: And which subjects do you prefer to design?

FABIO: I love tattooing faces, although I also design with pleasure iconographic and classic subjects of the American traditional.

ZERO: What do you think about Rome as a place for tattoos? Let’s split the question in two parts and starting by tattoos artists: it seems that here in Rome there are lots of excellent names.

FABIO: Absolutely! You are right! Rome has been an excellent schools both for parlours and for single artists. All together gave a big boost to national and international tattoo.

ZERO: Which are the artists do you prefer here in Rome?

FABIO: Besides the artists of my study, of which I appreciate and set both the work and the human side, there are really many studios and valid artists.
I appreciate the old-timers artists for the importance they have had over the years due to the schools they founded: people like Mamone, Spillo or Heinz. They brought prestige to our town in the national and international scene.

ZERO: Which is the taste of the public instead? Rome is still a place to be renewed and make it become less rough or not?

FABIO: Absolutely not! Rome is a very avant-garde and receptive town, which follows and grows together with the scene, also with a lot of passion!

ZERO: In which studies, both Italian and foreign, would you get tattooed your eyes closed?

FABIO: In Italy there are some studies in various cities that stand out for quality, but there are so many others that I esteem in addition to these, like Korpus Domini and Diamond Tattoo.
Abroad, Seven Sword of Myke Chambers of Philadelfia, Honorable Society of Marco Cerratelli in Los Angeles, Spider Murphy of Theo Mindell in San Francisco, and in London the Family Business of Mo Coppoletta, the Seven Doors of Deno, Xam and Claudia de Sabe and the BlackGarden. But these are only some of the names I know: there are other studios who aim to high quality like us and it is very difficult to name all of them.

ZERO: What do you think about a so strong spread existing now for tattooing? As a quantity of work I imagine you see it positively, but do you feel the risk that all the behind culture would be misunderstood or even would be put aside?

FABIO: I always observe with curiosity this phenomenon, as I’m feeling a tattoo artist neither of the old nor of the new generation. Normally I do not look forward with fear to the future because, while increasing competition, job for those who seek quality, there will always be.

ZERO: Speaking about issues a little less serious, I imagine that you have had under your machines several well-known people: Have you ever been afraid to do some irreparable damage?

FABIO:  Absolutely not, because I do not give more importance to the tattoo performed on the body of a famous customer than a common customer. Each of the enthusiasts who ask to get tattooed by me, deserves the maximum of my commitment.

ZERO: Do you have a favourite tattoo or you’re more attached to, among the ones you’ve done?

FABIO: Usually my favourite tattoo is always among the last I did, because I am quite critical and I am always working to increase the quality of my tattoos. So I always get fond of the last that then will be replaced by the future ones.

ZERO: Same question but concerning the tattoos you have on your body.

FABIO: I have some I love and some I hate, but, definitely, the one I’m most attached to, is the tattoo dedicated to my son Edoardo, done by my dear friend Marco Varchetta from Naples.

ZERO: The most absurd customer you’ve ever had?

FABIO: That customer who once fainted about ten seconds after I started tattooing.

ZERO: Which is the most absurd tattoo you have ever done?

FABIO: A bondage design: a tied woman, made on the thigh of a customer.

ZERO: Has anyone ever asked you to tattoo a bottle of whiskey?

ZERO: After work in what pubs or restaurants do you like to go to relax when you are in Rome?

FABIO: I’m not a frequent guest of pubs, but I am fond of good food and among my favourite restaurants, in my neighbourhood, there is one of some dear friends (very fond of tattoos like me) its name is “TRECCA BISTROT”: here I eat excellent revisited Roman cuisine and, above all,  I really feel at home.

ZERO: We finish with some easy questions to which answer yes or not. Tattoos are made as a pawn?

FABIO: Absolutely yes and they also make so much laugh when you lose stupidly.

ZERO: And those decided in drunkenness.

FABIO: Of course, it happened to every good sailor.

ZERO: And those in after of the evening before?

FABIO: Ahahah, always!! And it’s so nice to discover them when you wake up!!!